Shop all items / books / originals / prints / sculpture
Brian Adam Douglas
available / sold out
Raised in Texas and a graduate of School of Visual Arts in New York, Brian Adam Douglas is a Brooklyn based multidisciplinary artist whose practice ranges from monumental woodcuts to stencils and large scale drawings to collage. Douglas has gained international recognition for his street art which he executes under the moniker ELBOW-TOE. His improvisational roots that he developed working in the streets have carried over into his gallery work — densely packed, cryptic figurative works made entirely of paper.
Douglas' solo show Due Date exhibited first at the Warrington Museum in the UK and then moved to Black Rat Projects in London. In 2011 Drago published the catalogue Paper Cuts about Douglas' work and practice. In September 2013 Douglas presented his critically acclaimed show, How To Disappear Completely at Andrew Edlin Gallery in New York City.

More info on Brian can be found via Andrew Edlin Gallery here http://edlingallery.com/artist/brian-adam-douglas 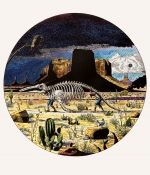