Judith Supine brings us an electric new print, Night Nurse. Somewhere in between the milky way and a velvet 60's backlight poster, Judith Supine creates their own universe for this large mystical screen print. Lots of unique editions as all the color details are done by hand using acrylic interference paint atop of a shimmering black UV ink layer. This print really shows Supine's evolution in his print techniques.

In addition, the first ten prints sold come with an extra goodie from Judith's personal collection. Like what? We don't know, could be anything!

Screenprint, Acrylic Interference paint and Black UV ink on Archival Paper Dimensions: 31 x 41 Inches.  Signed and Numbered by Judith Supine 2012
Judith Supine is an artist living and working in Brooklyn, NY. Supine could not speak until a month after his seventeenth birthday. He could not physically articulate words, he could only squeak and grunt. Supine often drew pictures to communicate with his family. His mom saved all of his pictures, just one of many reasons why his mom is great. 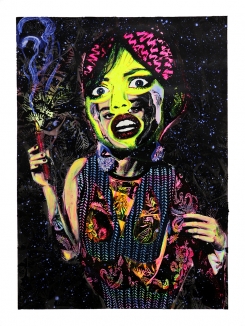 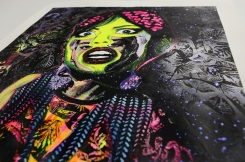 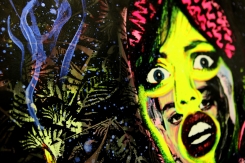 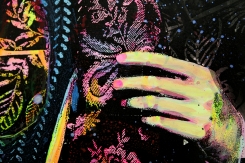