MOMO's new series, "Miami Paintings" started as a project while at the Fountainhead Residency in Miami in early January and finished nearly five months later at his studio in New Orleans.

These new paintings are reminiscent of his MOMO Maker series, exploring vocabulary in combination and repetition, however, as each piece is hand painted, there is some room for play between the concepts rules.

Acrylic, Watercolor, and Airbrush on Watercolor Paper.
Dimensions: 16 x 22 Inches
Signed and Dated, MOMO 2011.
MOMO is known for thoughtful post-graffiti: experiments include tagging his name a tag the width of Manhattan, over-sized outdoor collage, tide powered sculpture, a computer script which makes his art for him, and prints, paintings, and videos that rely on chance and context for fun and substance.

Born in San Francisco, he has traveled most of his life, discounting six years New York. He joined a graffiti crew in 1999 while living in Spain, found his use of color while employed in the Caribbean, and fell for outside art while living outside: in a cave for a year, in a truck for a year, and in a tent for a year. 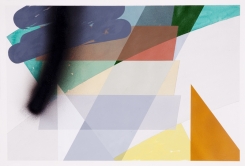