Cash For Your Warhol CFYW Russian

Limted Edition of 200
“CFYW Russian” is the largest edition of its kind to-date, and was first seen in public interventions in Miami during the 2012 art fairs.
“CFYW Russian”
Limited edition of 200
Screenprint on corrugated plastic.
Dimensions: 12 x 18 inches (slightly variable)
Signed and dated on verso, Geoff Hargadon, 2012.
Cash For Your Warhol introduced its conceptual project in 2009, referencing art-as-commodity, the financial crisis, and the ubiquitous signage to which it responds. While appearing in a variety of media, the corrugated plastic signs remain today CFYW’s best-known work, featuring a deadpan design that both blends into and frames the landscapes in which they appear.
In 2011, CFYW was featured at Moniker Art Fair in London, and was Société Perrier’s featured artist at Pulse Miami. This past year, the Andy Warhol Museum in Pittsburgh added the signs to its permanent collection. Cash For Your Warhol is the brainchild of Geoff Hargadon, whose photography has appeared in a number art publications. Hargadon is also the creator of The Somerville Gates (2005). More at www.cashforyourwarhol.com. >> Click Here for More Works by This Artist 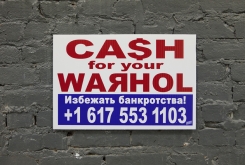 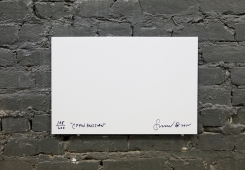 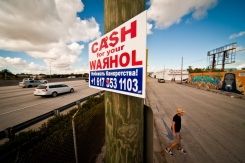 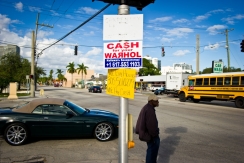